The Four Horsemen of the Apocalypse [Revelation 6:1-8]

I watched while the Lamb ripped off the first of the seven seals. I heard one of the Animals roar, “Come out!” I looked—I saw a white horse. Its rider carried a bow and was given a victory garland. He rode off victorious, conquering right and left.

When the Lamb ripped off the second seal, I heard the second Animal cry, “Come out!” Another horse appeared, this one red. Its rider was off to take peace from the earth, setting people at each other’s throats, killing one another. He was given a huge sword.

When he ripped off the third seal, I heard the third Animal cry, “Come out!” I looked. A black horse this time. Its rider carried a set of scales in his hand. I heard a message (it seemed to issue from the Four Animals): “A quart of wheat for a day’s wages, or three quarts of barley, but all the oil and wine you want.”

When he ripped off the fourth seal, I heard the fourth Animal cry, “Come out!” I looked. A colorless horse, sickly pale. Its rider was Death, and Hell was close on its heels. They were given power to destroy a fourth of the earth by war, famine, disease, and wild beasts.

Today on Scandia Bible Church Podcast, Pastor Monty Simao continues with our study in the book of Revelation in which we are introduced to the four horsemen as we witness the opening of the scroll by the One who is worthy, King Jesus.

While the Four Horsemen of the Apocalypse are sure to capture our imagination, and the imaginations of pop culture, few even know where these images come from — and even fewer, what they mean. But in the midst of this confusion, Christ, the triumphant Lion of the Tribe of Judah, the Lamb that was Slain, releases these horsemen to do His bidding as He brings judgment, warning, and trial upon the earth. 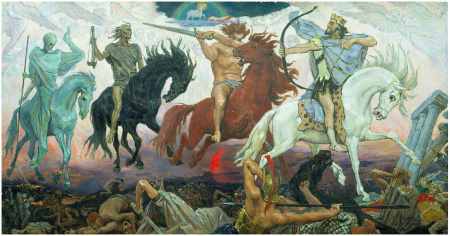 This entry was posted on Sunday, January 13th, 2019 at 6:02 pm and is filed under Monty Simao, Revelation. You can follow any responses to this entry through the RSS 2.0 feed. Both comments and pings are currently closed.